Went on a weekend getaway in Xi’an last month and was majorly disappointed with most of the food I had there. Despite the research efforts I put in my quest for the best pao mo, rou jia mo, dumplings and noodles in the city, the best thing I had turned out to be the knife-cut noodles they offered for breakfast at the Shangri-la.

Perhaps Xi’anese food is just not for me.

However there was one dish that I did not have time to try while I was in Xi’an, and this was the Biang Biang Mian (Biang Biang noodles). Whatever “Biang” means, I don’t know. I don’t know anything about it apart from some vague, guessy explanations on Wikipedia. What I do know is that the chinese character for “Biang” looks crazy, with 58 strokes.

Being a big fan of noodles of all sorts, I felt that I had to do Xi’anese food justice by looking for this Shaanxi region specialty in Hong Kong. I made a quick search for “Biang Biang noodles” on openrice.com and found a little shop in Jordan. I have actually never been to Jordan before but coincidentally I had an errand to run there that week so it was perfect timing 🙂

The shop is tiny with only one large table and a few seats facing the the wall. As expected, most people were having the infamous biang biang noodles. I also noticed that at the side of the table there stood a few mini terracotta warriors. 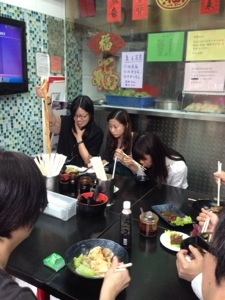 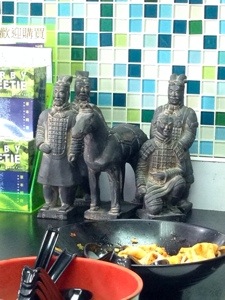 I have a habit of drinking soy milk whenever I have spicy chinese food, so I started off ordering these to drink. If you are fussy about soy milk then you will not like these at all. They taste disappointingly artificial so if I ever come again I will definitely opt for cola. On the other hand my shredded potato appetizer was delicious! It smelled so good I would have liked to eat one whole portion or even two myself. 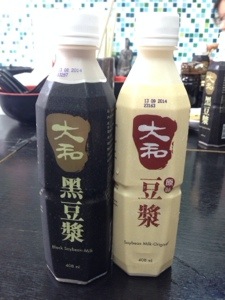 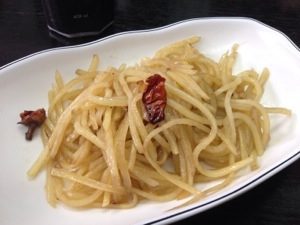 Soon after I devoured the shredded potatoes the first bowl of biang biang noodles in my life appeared infront of me. I ordered my bowl with some fennel dumplings and donkey meat.

Yes and this was the donkey meat. I believe this was also my first time eating donkey. It was slightly smokey and seemed like an extra gamey version of turkey. To be honest I only ordered this because I never had donkey meat before and after eating one slice I did not want any more. It was dry and quite bland. 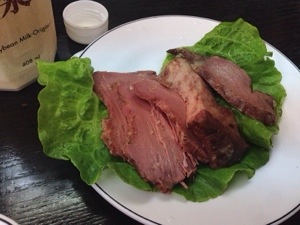 And so I started mixing the noodles to let the spicy sauce cover every milimetre of chewy noodly goodness.

The fennel dumplings were also nice, though I don’t normally like fennel. The reason I ordered these was that I did not know what “fennel” in chinese was and just pointed at whatever my mom did not order because I knew I would steal some of her lamb dumplings anyway. 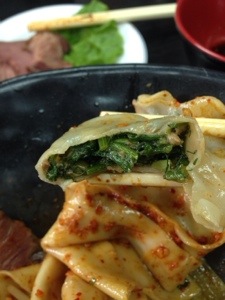 And here is a pic of the same biang biang noodles, but with lamb dumplings.

I actually liked the lamb dumplings better than my fennel dumplings.  As a dumpling devotee I believe that the texture of the dumpling’s skin makes the dumpling. Although most of the time people rave about “thin-skinned” dumplings which are smooth and chewy at the same time, the skin here is on the thick side. However, this is the way Xi’anese dumplings are supposed to be and the thickness here is in fact what makes the skin extra chewy (in a good way) and is still very smooth.  I would describe these as having the perfect dumpling skin to meat to veggie ratio.

At the end I also ordered the roast lamb flavoured with cumin. At 180 HKD this small portion seemed a little expensive for a restaurant like this, but I’ll admit that it was one enjoyable dish. In conclusion, although I would not travel all the way here again just for this meal, if you ever want to try Xi’anese food in Hong Kong or just happen to be in the area, I’d recommend this place 😀 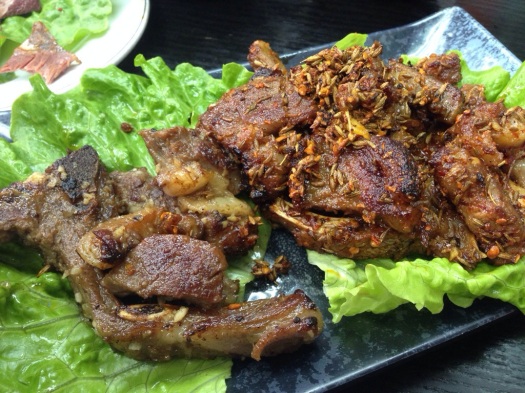 Shop 3, G/F, Keybond Commercial Building, 38 Ferry Street, Jordan  (P.S. this place does not seem to have an English name at all so you will just have to go by this address if you don’t read chinese!)