For the longest time, finding somewhere good to have Vietnamese food in Hong Kong seemed extraordinarily difficult. Although by good I certainly do not just mean “upscale”,  it does appear that there have hardly been any attempts at high-end Vietnamese cuisine in Hong Kong. I mean, in the past, whenever I craved for a bowl of beef pho, I would only think of going to one of the few modest, super-cramped Vietnamese restaurants in the Tai Hang neighbourhood. At times of social gatherings that required more space, I’d generally be stuck with one of the inauthentic, Chinesified renditions of Viet cuisine scattered around the island.

This all changed when my good friend Eva told me about the new(ish) Vietnamese restaurant at Lee Gardens, An Nam. 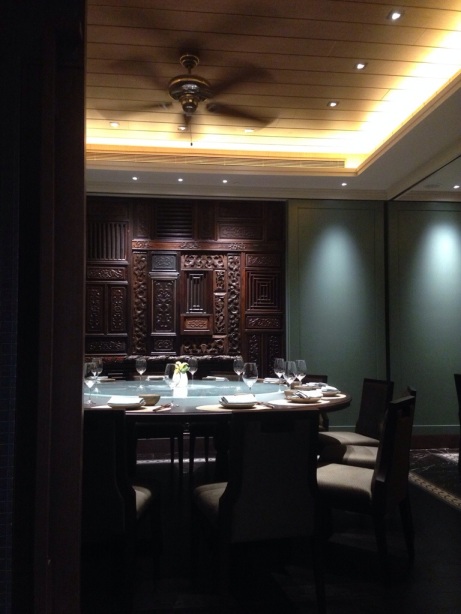 Belonging to the same group as the Japanese restaurant Gonpachi next door, an extention of the famous Tokyo restaurant that I always saw as an overpriced tourist trap, I had initial doubts about the authenticity of the food at An Nam. But! After my first meal there, I’m happy to say that I was probably just a little too cynical.

The first dish I tried was the big head prawns in fragrant sauce. The prawns were fleshy, firm with a bouncy bite, soaked in a flavorful shrimp roe sauce to form a succulent, briny dose of omega-3 😀

Next up was one of my favourite vietnamese dishes – grilled pork “bun noodles” that always leaves me feeling extra healthy without taking away from the pleasure of taste. This reminded me of the grilled pork noodles from Banh Mi Bay, a cute Vietnamese “cheap eats” diner that I used to frequent in Bloomsbury, London.

I also tried the rare beef pho and liked it very much compared to most places I’ve been to in Hong Kong. With tender beef slices and a savoury stock, I’ve been back a few times for this bowl of pho. One thing though – the temperature of the broth (upon being served) fluctuates depending on the time of the day/how busy they are, so a polite reminder for them to serve it hot would be a good idea when you order! I personally cannot stand lukewarm soup noodles !

The rice rolls, which were essentially finely minced pork wrapped in a thin slippery skin with fresh herbs was also satisfying. 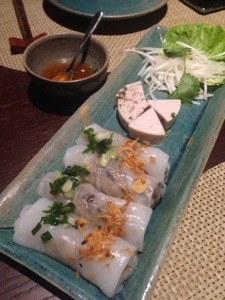 The shrimp paste on bamboo sticks however, were not exactly worth raving about. They were not horrible but definitely on the dry side. I think I would probably be able to find better versions in other Vietnamese restaurants, even in one of the casual diners in Tai Hang. 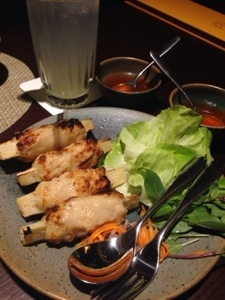 The pork and shrimp rice paper rolls (goi cuon) on the other hand were well-made; at many other places I often found poorly proportioned versions of these with either too much vegetable or noodles inside. Here, as you can see, the rolls have been done in a good size and are filled with well-balanced amounts of each ingredient. Goi Cuon devotees may, however, find the skin a little too chewy and rubbery.

The deep-fried frog’s legs and deep-fried shoft shell crabs literally tasted the same. Look at the next two photos… at first glance they pretty much look the same too. Anyway… both were enjoyable since for me, all things deep-fried that are not too oily, reasonably crispy and not without flavour are easily good enough to make delicious snacks to go with any kind of drink :p

THE deep-fried dish I really like at An Nam however, is the spring rolls. The waitress says they are all filled with fresh shrimps and indeed, as far as I remember, these spring rolls are one of the best Vietnamese spring rolls I’ve ever had in Hong Kong. A neatly stacked bowl of baby lettuce is also served on the side for wrapping around the spring rolls, adding a lovely layer of fresh crispiness.

The stir-fried beef noodles were also wonderful – piping hot and bursting with flavour.

In general, I still foresee myself coming back to An Nam again and again but what I will never order again are the following things :

These baked cheesy clams which were seriously over-baked and therefore dry.

The coconut jelly that is almost tasteless.

The mediocre chocolate fondant and sweet potato dessert (pictured below – it’s that milky looking bowl of whatever at the back). I can assure you that sweet things are not An Nam’s forte. I would suggest leaving after your meal to go for dessert elsewhere 😛 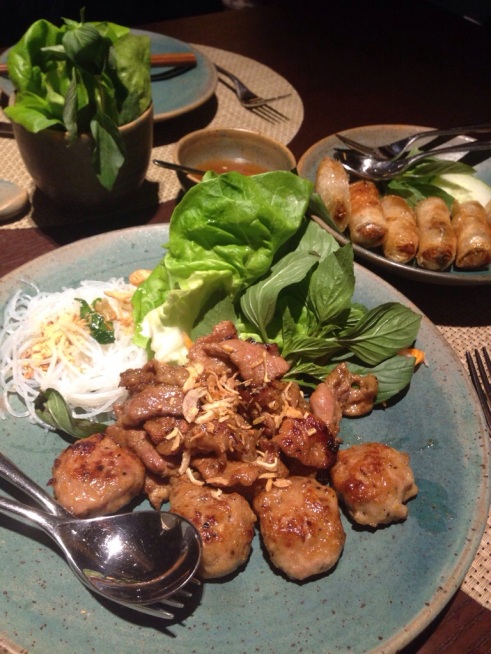 Had lunch at Ki Ra La (きらら) today. Upon arrival I discovered that it is related to Sushi Dokoro Hikari in Tin Hau and thought “#%@! this is gonna be a waste of a meal”* BUT I was wrong 🙂

I opted for the Kirala Deluxe Set ($250) and mom went for the Wagyu Stone Grill Set ($480). Both started with a standard salad + chawanmushi combo:

To my relief, these 2 starters hinted that it would be reasonable to expect better quality mains here at Ki Ra La than its Tin Hau counterpart. The salad was crisp and fresh, and the chawanmushi contained bits of chicken and shrimp that were unexpectedly flavourful, indicating the use of fresh rather than frozen ingredients.

Next came my mom’s Uni Tofu and Sashimi. The homemade Uni tofu was pudding-like in texture and had significant bits of sweet uni inside. The sashimi bowl however, was nothing to scream about. The toro was tendon-y and the botan-ebi wasn’t exactly full of umami. The spoonful of uni was OK :p 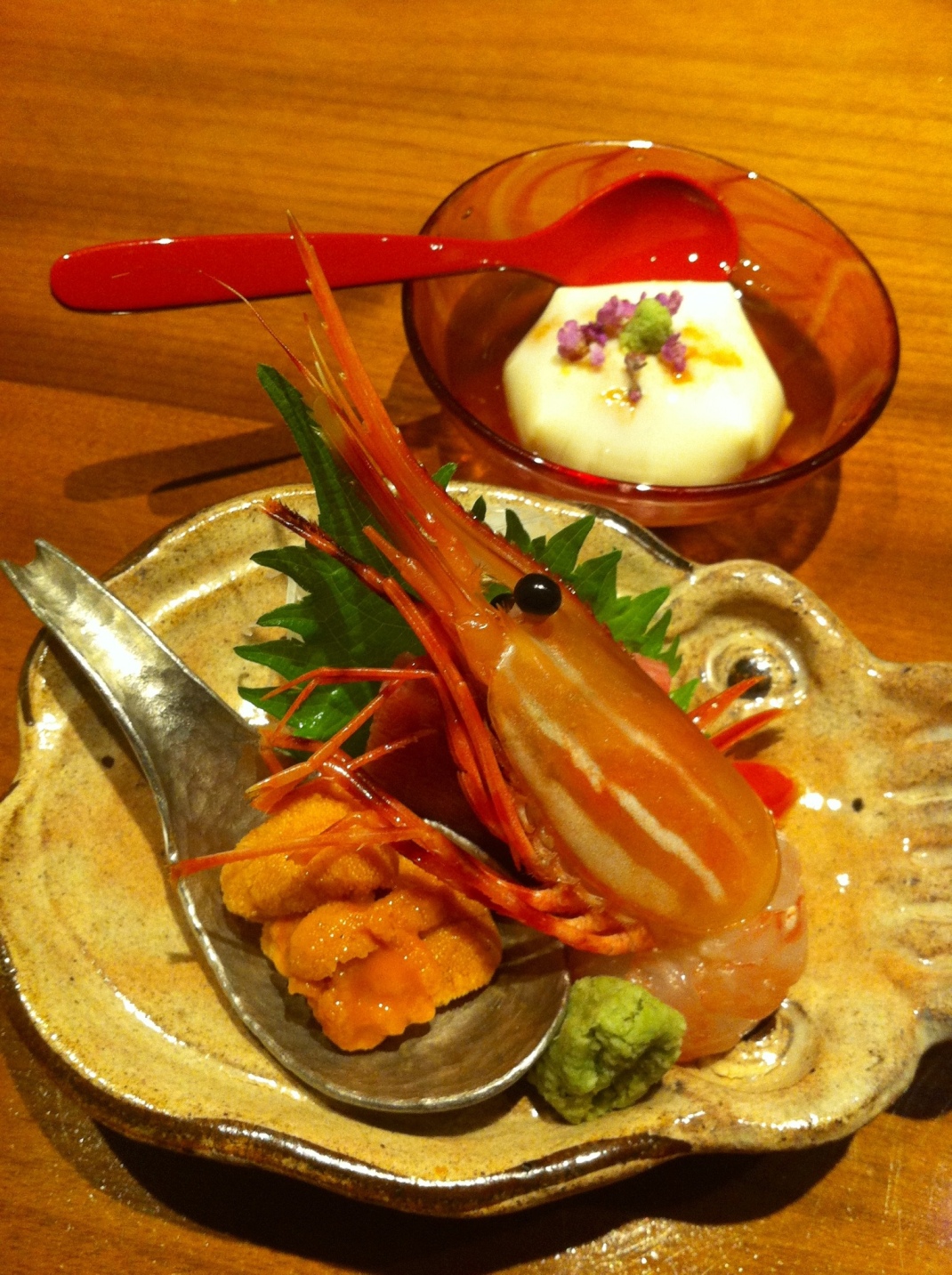 Then came my entire lunch set.

Again the sashimi was no good (although considering the fact that this set costed only $250, it was probably fair). BUT! everything else in the set justified potential return. The tempura batter was nice and thin, and the zaru-udon that I ordered in place of the steamed egg rice that was meant to come with the set was nice and chewy. All in all it was a well balanced lunch set.

I also ate a bit of my mom’s meal. 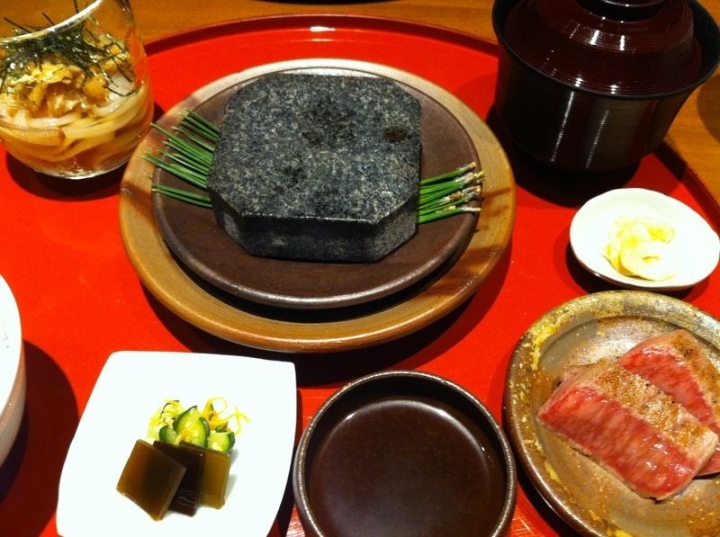 I have been trying to eat less red meat lately for various reasons but hey there was literally only 4 small pieces of beef in the entire set. So I stole one from my mom.

The beef served in this set is Miyazaki-gyu ranked A4. Wagyu is generally ranked from 1-5 with 5 being the best. The meat at rank 5 is supposed to have the highest marbling of snowy white fat in its muscle meat (as opposed to fat with a slight yellow tinge), and has a characteristic smooth, melt-in-mouth texture. The beef here in Ki Ra La’s lunch set, despite being ranked more humbly at A4, was delicious after a light sear on the little stonegrill. And as you can see, each piece was neatly cut into bite-sized, perfect rectangles, which was a plus for my lazy jaws.

Our meal ended with grapefruit jelly and a light chocolate cake. Both exceeded my expectations because most Japanese restaurants in this price range only serve either fruits or ice cream as set lunch desserts.